Every golfer knows the game is as much mental as anything else, especially at a renowned golf course like the one here at The Peninsula on the Indian River Bay. The mental and emotional elements of the sport is part of what makes a seemingly simply objective — sending that little white ball into a slightly larger hole — so darn difficult!

Yet there’s no denying the fact that all us avid golfers just can’t get enough of those mental hurdles, because every time you improve, it’s a terrific feeling. Having a solid head on your shoulders goes beyond thinking your way around the golf course. Preparation is paramount.

While there’s no denying the most important tools in your golf bag are the clubs, there are countless other items you’ll wish you had out on the course. You don’t want to be the person who bogs down the bag with everything you own, but there’s a fine balance of having what you’ll need out there.

Then Peninsula on the Indian River Bay has some suggestions of essentials you should keep in your bag while playing the Jack Nicklaus designed, par-72 course. So get out there and post a low number!

Right about now, you’re probably thinking, “well duh.” But you’d be surprised how many golfers out there don’t have enough balls to make it through a round, or who sometimes have none at all! Don’t be that person who reached into their bag on the first tee box and comes up empty-handed and sheepish. And so you don’t have to hit a driver off the deck, make sure you have more tees than seems possibly necessary!

Ever have your favorite glove rip a hole in the middle of your round, or even worse, on the first hole? Maybe you hit a poor shot and got a little aggressive tearing it off and doing some damage. While not all golfers choose to use a glove, it’s commonly used and saves your from blisters after 18 long holes. Best to keep a spare. Just in case.

There’s a fine line between working on your tan (and those sweet golfer polo tan lines!) and risking long-term harm to your skin. You’re about to spend four-plus hours out under the sun and skin cancer is not an ailment worth risking. It’s easy to forget sunscreen at home or in the car, so best to keep a tube in the bag, and at the risk of sounding like your mother, please re-apply throughout the day!

You’re not the only one who prefers to get out on the golf course in the cooler morning and evening hours. Hundreds of thousands of your best little friends are looking for a snack, but you don’t have to be the meal. Same as the sunscreen. Don’t risk forgetting it and just keep some in the bag. And pro tip, make sure it’s strong enough to actually repel the critters!

Maybe you’re good at checking the weather report before going out and hitting the course. Or perhaps you love the game so much, it doesn’t need to be perfect conditions for you to hit the links. And more often than not, a summer shower pours down unexpectedly. In any case, best to keep a rain jack, club cover and umbrella in the bag to keep dry while seizing advantage of those now receptive greens! 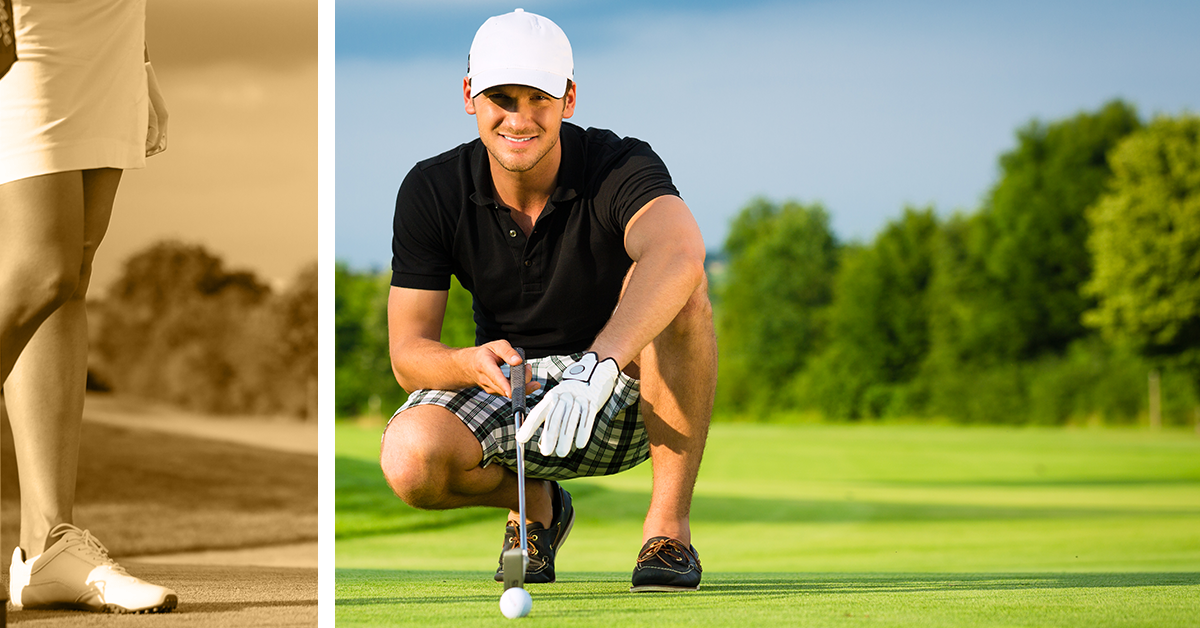 You can’t rely exclusively on the drink cart to come around every time you need a drink — which is certainly always water, right (wink, wink)? Hydration is critical to any athletic endeavor. Plus, a water bottle is something you can refill throughout your round on the golf course as you battle the humid summer air.

If you’ve never used one during a round before, boy are you missing out. Try it just once and you’ll never go back, promise! Sometimes just one person in your group having a rangefinder is enough, but rarely are your balls in the same vicinity. Knowing the exact yardages for any shot is a huge advantage. So unless you always play with a caddie who has it charted out in his book (in which case, tip them handsomely), put a rangefinder in your bag. You can even use apps on your phone, which can calculate yardages via GPS. The GolfNow app does this very well!

Golf is a gentleman’s game through and through. You wouldn’t want a nice, fat ramp in the line of your putt, so don’t leave one for the groups behind you to contend with. Small and easily packable, a divot fixer should be a must-have in every bag and used anytime a ball is flighted onto the putting surface. Trying leaving your mark on the course in other ways!

For whatever reason, it seems like this is the one thing above all others golfers neglect to keep handy in the bag. Marking your ball is not only a courtesy to other golfers in your group, but a huge perk for your game. Marking your ball on the green is the only time you’re allowed to pick up the ball and clean it back to perfection for the most important shots in the round. So store a coin or two in the bag just in case. Actually, scratch that. Best to keep three or four!

Speaking of cleaning the ball, doing so with your shirt isn’t recommended. Most golfers keep a towel specially designed to clip onto the bag itself, but just in case you’re new to the game, add this essential immediately. Beyond the ball, you’ll want to clean the grooves on the head of your irons and wedges to maximize the compression of each shot and eliminate shanks. Well, at least eliminate one of the excuses for errant shots.

Finally, but certainly not least important, make sure to pack some snacks in that bag. Your body is using up quite a bit of energy out on the course, so keep yourself fueled up. Energy bars, granola bars or a bag of trail mix are great options to occasionally stash in your golf bag throughout the year. Basically anything that, you know, would survive a nuclear apocalypse.

Play at The Peninsula on the Indian River Bay Today!

The Peninsula on the Indian River Bay is an award-winning and nationally recognized golf course. Come play the 72-par Jack Nicklaus designed course or purchase a home and play the exceptional course every day if you choose. Either way, contact Insight Homes today!