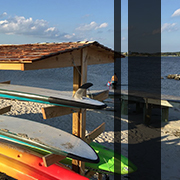 Nature is wondrous. Plant life, animal life, and ocean life are so full of variety and mystery that a lifetime is not enough time to explore it all.

Delaware’s Three Inland Bays are amazing, unique ecosystems that are found nowhere else on the planet. The Peninsula on the Indian River Bay in Delaware is incredibly lucky to offer resort style living. Boasting a Jack Nicklaus Signature Golf Course, five-star dining, and supreme tranquility, this 800-acre natural paradise is one-of-a-kind. Below, we’ll reveal some little-known facts about Indian River Bay. Contact us today!

Rehoboth Inland Bay, the Inland Bay north of Indian River Bay, which lies in the middle of the three Inland Bays of Delaware, was founded by an unknown English sea captain from Jamestown in the late 1600s, who was following the maps of Captain John Smith. While exploring the Inland Bays along the Delaware shore, the captain and his men stopped for fresh water. Where he stopped, he found a flat peninsula with dwarf pines and sand dune barely above sea level. He named this place “Rehoboth” after Genesis 26:22, which means broad places or room.

The Indian River Inlet and the Inland Bays are one of Delaware shore’s most popular summertime destinations, a warm weather playground that people come to visit from all over the United States. The Peninsula on Indian River Bay is a golf community that endeavors to leave the least amount of human footprints behind. Specifically designed around the existing waterways, The Peninsula on Indian River Bay offers the best of the Ocean, beach, pools, golf, and resort living alongside nature. Bald eagles and osprey are regularly spotted taking advantage of Delaware shore’s fish population, as well as seals and dolphins, which are spotted playing in the Bay.

The Peninsula on Indian River Bay is the perfect summer home, vacation home, or second home for you and your family. It’s as close to nature as you can get and still have all of the amenities of home. Play pickleball, walk through the nature preserve, go fishing, swim on the private beach, and soak up the sun till your heart’s content. Then enjoy The Peninsula’s brand-new 33,000 square-foot Clubhouse, where you can meet friends and neighbors for an evening of world-class dining and drinks by the fireplace. The world is your oyster; all you have to do is find the pearl. Contact us today!